What are your thoughts on a PCB-less enclosure?

I bought my sensors and ESP controller separately before they were available as a kit however shortly after that, kits were made available for purchase directly from AirGradient and thus decided for the time being to order a PCB since it was a lot cheaper than having it manufactured locally.

Unfortunately, shipping has been very slow so far with a couple of big gaps between updates. At the time of writing the package has been in transit for 37 days with the last update on the 8th of November and while I hope it’ll still arrive , I made peace with the idea that the package could have been lost in transit.

If anyone wonders, this is how I’ve been using it over the last couple of weeks 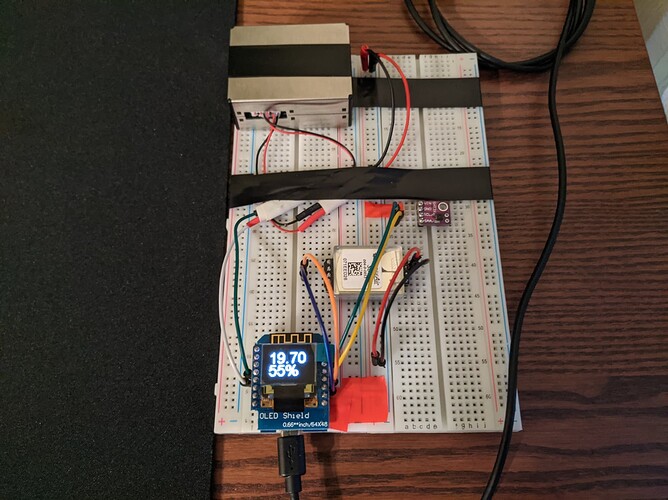 My plan was that once it arrives, I’ll move all the components from the breadboard over to the PCB and print the enclosure for it at a local shop. That being said, since it doesn’t look like this’ll work out, I’ve been thinking of alternatives.

One of the things that I’ve been wondering about is whether there is a strong case to even use a PCB. Since the connections between the components aren’t complicated, would there be any downside in making an enclosure in which the sensors/controller/lcd can be “slotted” in and connected through wires directly?

I don’t have any “real experience” with 3D printing/CAD modeling so I don’t know if there are any downsides to this approach. Do you have any thoughts on it?

@zoopp
We see on average about 3 weeks of shipping time. So something definitely went wrong with your shipment. I will send you today a new set of PCBs from our base in Thailand (of course free of charge) and inform you about the tracking number by email.
I really like your built on the breadboard. Looks very clean!
I made versions without PCBs (just soldered the wires together) but would not recommend it because many cables need to be soldered together, some to the same pin (e.g. GND) and the whole thing becomes very fragile.
I would say, better wait for the PCB

Thanks, that’s very nice of you and I really appreciate it! I hope it’s not too much trouble.

Mhm, I get your point around the thing becoming fragile if everything is solder together with wires. What if instead of doing that, the enclosure would have headers where and each component (e.g., controller, sht, co2 etc.) could be slotted in. Then it all becomes a matter of figuring out a way to route cables to every header pin to create all the required connections. The connections with each component should be decent enough this way.

Actually now that I read what I just wrote, that’s pretty much what the PCB does… yeah, it doesn’t really look like a good idea. In the worst case scenario, a prototyping board cut to size could be a better and less complicated substitute in absence of the real PCB.